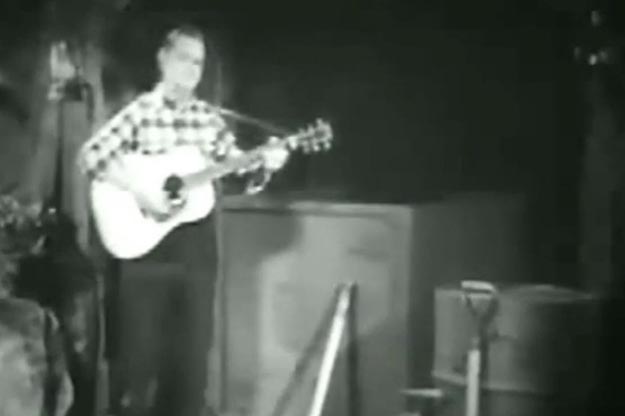 Ok, country music and me, we’re strangers. But this gem, so great it’s a live video recording of Sixteen Tons, a song about coal from Merle Travis. It’s a worthy choice to kick off 2013 and what we are exploring as the documentary progresses – the idea of The Company, and how they owned EVERYTHING. 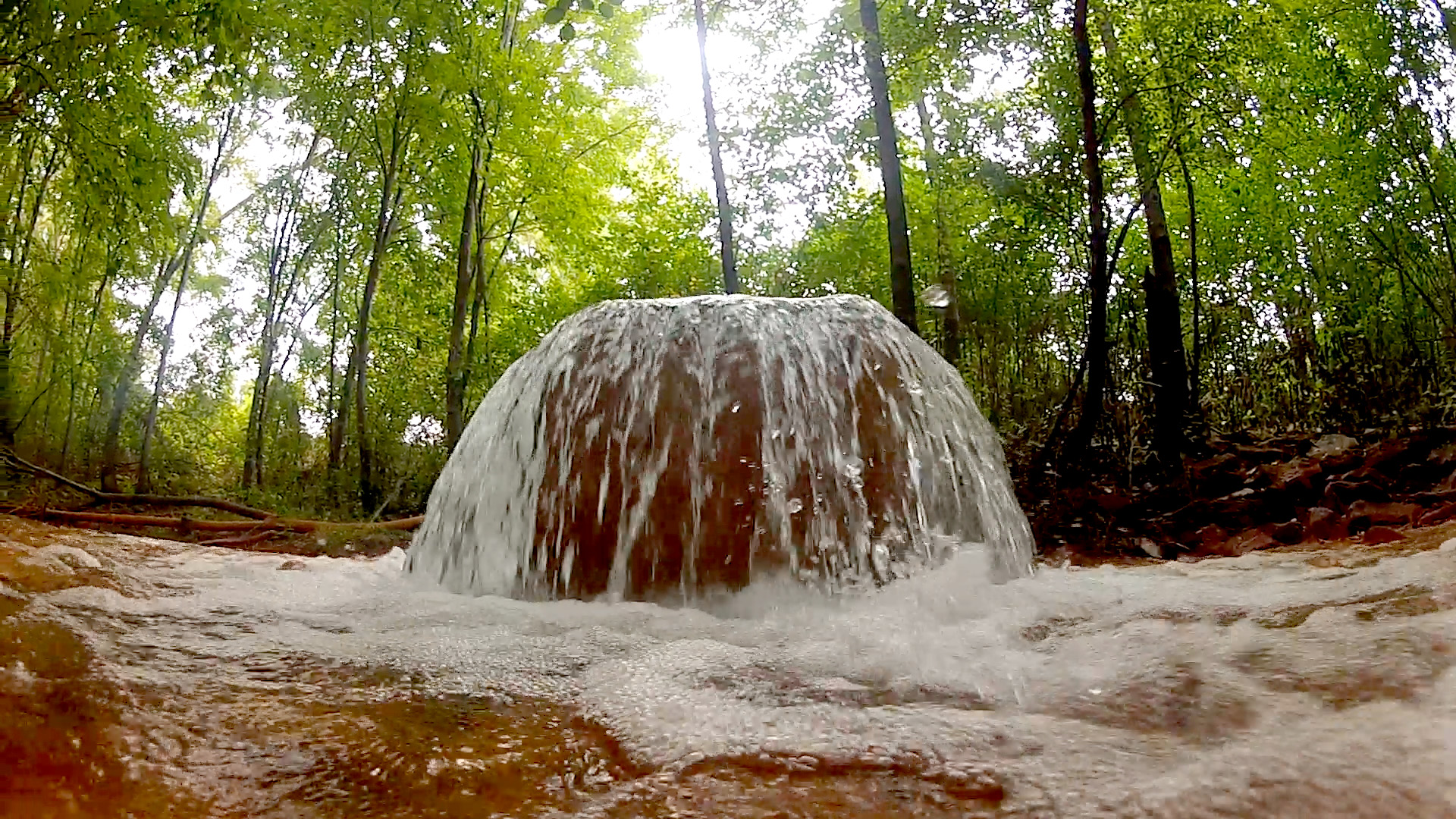 The images are surreal – creeks so orange they appear to be flowing with diluted lava rather than water – like something you would expect to find on the movie set of a b-list Mars invasion flick. And the smell – it’s like a thousand rotten eggs were puréed and added to the rusty mix.

But this isn’t Hollywood’s cliché construction of life on Mars. Rather, it’s a scene that residents of the Wyoming Valley live with every day – a not-so-subtle reminder of the industry that continues to define their communities.

We learned about Abandoned Mine Drainage – or AMD – early into the Ashley’s Breaker project, when we first connected with Bob Hughes, executive director of the Eastern Pennsylvania Coalition for Abandoned Mine Reclamation (EPCAMR). Simply stated, AMD is polluted water that flows out of abandoned mines. And EPCAMR is working to reclaim abandoned mine lands and remediate streams and rivers impacted by AMD in Northeastern and North Center Pa.

It’s impressive – though seemingly overwhelming – work. But the work is also pretty awe-inspiring, especially looking at it through an artistic lens. So, what’s artistic about an orange, smelly creek? How about shoveling iron oxide sludge out of the water, baking it in a solar kiln, sifting it into fine powder, and selling it to artists.

The transformation of polluted mine sludge into art continues to mesmerize. And after watching a group of college students refine the art pigments during a service project with EPCAMR, we wanted in.

Bob graciously took us to some of the sites so that we could get up close and personal with AMD, and none was more spectacular than Solomon’s Creek in South Wilkes-Barre. There, we donned wading boots and ventured out into the sea of orange to stand beside one of three borehole-fountains as they gushed icy cold deep mine water. The experience was exhilarating, and, of course, prompted me to purchase packets of pigment when we returned to EPCAMR’s headquarters.

While I have yet to find time to experiment with the pigment myself, we did have the opportunity to interview Sue Hand, an artist who uses it regularly in her work (and the subject of a future post). In fact, Sue painted the very borehole that so intrigued and inspired us during our tour! 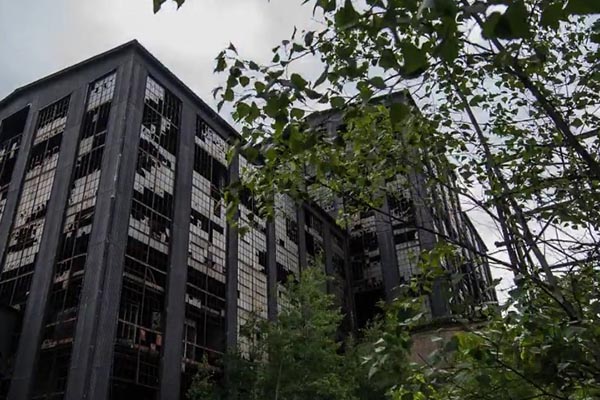 At this point in our project, we have been through the breaker at least a dozen times and have interviewed at least as many people. Heck, we even rambled around inside another old breaker near Mahanoy City for comparison.

We thought we had seen it all — almost veterans of coal breaker exploration. Except, it’s pretty challenging to envision how, exactly, the breaker operated in its heyday from looking at three decades of ruin.

So when Huber Breaker Preservation Society President Bill Best — who has been an invaluable resource throughout our exploration and research — offered to give us his “tour” of the breaker, we jumped at the opportunity.

And, yes, there was some literal jumping involved, as well as climbing, straddling, crouching, balancing, and holding one’s breath as the floor moved beneath our feet. You see, Bill took us inside the breaker — not just inside the walls that serve as a shell for the machine, but inside the machine itself.

And, we realized how little we had previously understood.

The four-hour tour took us along the same path traveled daily by close to 7,000 tons of coal during the breaker’s peak operation. We started at an outdoor station where mine cars were unloaded, traveled up the main conveyor to the very top of breaker, and then back down again through a series of screens, grinders and other equipment that sized, sorted, and prepared the coal for retail.

We even saw the finishing station where anthracite was “transformed” into Blue Coal, evidenced by the paint still found on the support beams and surrounding areas.

As we toured the guts of the breaker, Bill painted a vivid picture of what occurred in each area: how the machines worked, what the workers did, and where the coal went next, along with the sights, sounds and smells most likely experienced by employees.  His explanations made the breaker come alive for us in ways we previously didn’t think possible.

For the first time, we were able to see past the ruins and neglect to truly appreciate the industrial genius of the machine. 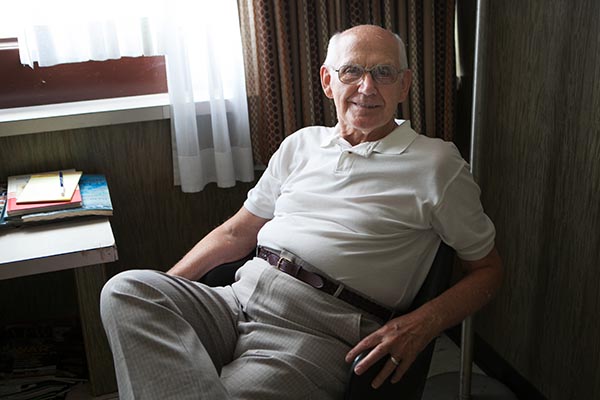 Social media is a game-changer for artists and writers. It enables us to share our work globally and to, essentially, be our own marketing teams. Most importantly, it connects us with the world in ways that were previously unattainable.

Our documentary project on Ashley’s Breaker is fast developing into a case study on the powerful impact that social media can have on our craft. Without it, our research and exploration would be lost among the billions of sites on the web.

While there are likely dozens of ways each of us has used social media to share information about the breaker project, the most compelling example started from an unexpected Twitter connection.

When I’m in Ashley – or anywhere that’s outside of my normal routine – I tend to tweet about what I’m doing. I’m a journalist at heart, and Twitter is the perfect platform to engage in some micro reporting. It’s become an important part of my storytelling arsenal, and I tweet as much for myself as for anyone who may (or may not) be reading my posts.

On a recent trip for the breaker project, I tweeted that we had “just interviewed a 94-year-old former miner in West #Pittston.” One of my colleagues – Jill, an economist in the Philadelphia area with whom I had only recently connected via Twitter – re-tweeted me, then tweeted again to say she grew up near #Pittston.

After I sent her our project’s link, she tweeted me back to say that her uncle’s father served as a barber in the town of Ashley for more than 60 years AND he lives right across the street from the Huber Breaker.

So she called her uncle, who connected her with his father, who agreed to sit down for an interview with us the following day.

John Kish turned out to be among our most interesting interviews to date. Although he wasn’t a miner himself, he cut the hair of hundreds of mine employees through the years, bringing a unique perspective to our exploration of the coal culture.

An artist as well, Kish was inspired to create a pencil wood sculpture of the breaker – which we’re trying to track down for this project. (Side note: leads are welcome!)

Despite the fact that I work with Jill at my day job (at a community college in the Philadelphia suburbs), we would have never had this conversation face to face. That’s the power of social media.